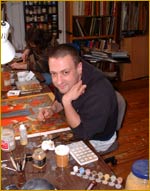 This studio’s icons are written by the hand of iconographer Marek Czarnecki, who continues to study under the tutelage of Russian Orthodox iconographer Ksenia Pokrovsky, within the Izograph School which she founded in Moscow. In recognition for his liturgical restoration work and iconography for dozens of local churches, Marek received the 1996 & 2004 Artistís Fellowship from the Connecticut Commission on the Arts, received the American Council for Polish Culture’s Jan de Rosen Award, and an apprenticeship grant funded by the National Endowment for the Arts through the Southern New England Traditional Arts Program. 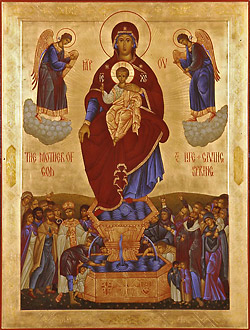 His icons can be found in in the homes and chapels of individuals, as well as churches across the country, including the Franciscan University of Steubenville, and the Catholic Cathedral of the Immaculate Conception in Springfield, IL. Featured in numerous articles, exhibits and videos, he continues to teach and write icons out of his studio in Meriden, Connecticut

Hey, all images are protected!